A Week of Releases! 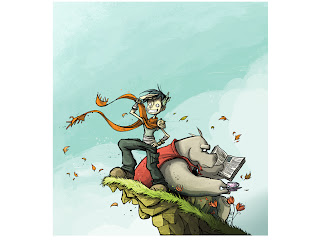 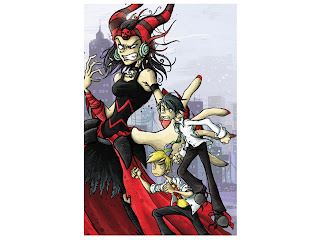 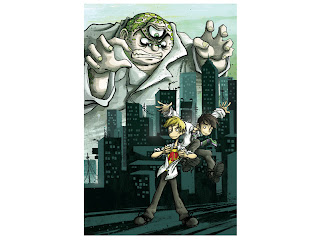 Next week is going to be an intense week. Everything I have been going on about over the last few months will be released in one big explosion of stuff being put on shelves (not the mightiest of explosions, I know, but an explosion none-the-less).

First up we have 'Cogg and Sprokit', my mini-series being serialised every few weeks in the magnificent Phoenix Comic. The first episode launches TOMORROW in Issue 4 of The Phoenix, or today if you've subscribed, I think, and I could not be more excited. Let me know what you think of it, I really hope you enjoy it as much as I enjoyed making it. It is basically one (mis)adventure after another as the dynamic (read; unlucky) duo go in search of treasure, adventure and ways to keep their heads attached to their shoulders whilst doing so in a world full of anthropomorphic animals, monsters and gorgeous sunset vistas. Aahhh. I may have lied about the vistas. If this sounds like your cuppa, and you have not subscribed to the comic, I know you can buy the individual issues in any Waitrose store every Saturday, and from some independant comic stoes such as GOSH Comics in London.

Next up if the fiction series I have been working so hard on with the fantastic and awesome award-winning author Guy Bass; 'Atomic!' Both the books in the series, 'The Vengeance of Vinister Vile' and 'The Madness of Madame Malice' are out on the 2nd of February, published by Scholastic UK, and they are going to ROCK! Guy has written such a fun, energetic, funny and intense story, and it was an absolute pleasure to illustrate it. What could be more fun to illustrate than a story of two boys who are the children of the world's greatest super-hero and the world's most evil, diabolical super-villain?! I've worked super, mega-hard on the illustrations (there's comic sections and everything in this book, take a looksee here), and am thrilled to finally see them on the shelves. But yes, phew. Enough self-promotion. I need to get back to work.
Posted by Jamie Littler at 07:44 No comments: 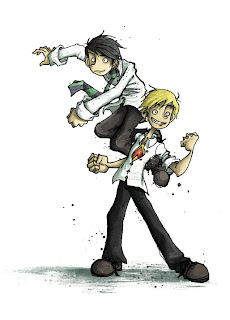 I am very excited to introduce the twins, Jonny and Tommy Atomic!!
These two are the stars of my first ever illustrated fiction book 'Atomic! The Vengeance of Vinister Vile', written and created by the fantastic Guy Bass and illustrated by, well, me, soon to be released by Scholastic UK. (And the second book, 'The Madness of Madame Malice' will be soon to follow!)
I am SO excited about this series. Full stop. Super heroes, flying islands, monsters and one bad tempered crocodile; Atomic has it all. The story is exciting, action-packed and hilarious. And I have worked my derriere off on this badboy, and am very proud of it. This is the project I have been working on that made me disappear from the blog world for a while, but I believe it was well worth it. I will blog about it in-depth soon, but in the meantime, why not check it out over here? It would be most kind of you, and we can high-five each other whilst saving the world from Vinister Vile. 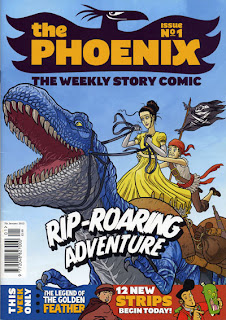 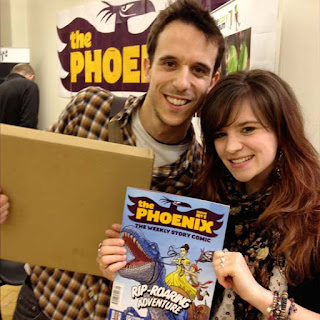 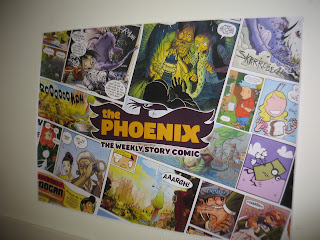 Hello, hello!
Well, what a last few weeks! The Phoenix Comic launched (in a firestorm of pure joy and AWESOME AWESOMENESS) on the 7th at the Oxford Story Museum, and what a launch it was!

Photo 1: ISSUE 1, BABY!!
Photo 2: Wonderful illustrator Laura Anderson and myself, clutching onto the precious issue 1 and a rather spiffing folder to collect the issues into.
Photo 3: Phoenix comics! Can you see Cogg and Sprokit?!

So many people turned up, fans, industry folk, comic creators (including the wonderful Sarah McIntyre, whose photos I have cheekily used in this blog post) and children of all ages, and there was much talking, drawing, laughing and such a positive response to a comic that I, as well as many others apparently, think will go far. Not only far, into SPACE, somewhere. And also there was seriously, what, a billion cakes (which tatsed phenomenal)?! Just fantastic. The only thing I was sad about was the fact that I didn't get to meet Philip Pullman, of whom I'm a huge fan, but I was so distracted by beautiful, beautiful Phoenix Comics. And Phoenix cake.

If you don't know what the great Phoenix Comic is, be sure to have a look, why dontchya?! Here!
Posted by Jamie Littler at 11:54 No comments: 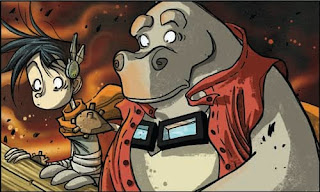 Happy New Year, space cadets!
May it be fruitful and full of fruit. THE PHOENIX IS BEING RELEASED THIS WEEKEND!! Sorry. I'm a tad excited. That's right; The Phoenix comic, Issue 1 shall be released this Saturday, the 7th of January. And long may it continue to soar. It seems to have come round so fast! I know, from the creators I've had the pleasure to meet and from being inside my own head, that we have all worked so hard on this baby, so I really hope you enjoy it!

If you don't know what I'm talking about (who ever does, wheeeeeee) or have forgotten the link or where you can subscribe to the comic, here's that link again. Here. I mean, here.
My on-going shorts, 'Cogg and Sprokit', will be starting in Issue 4, I believe, with a big ol' cover featuring our strapping adventuring duo. In the mean time, here's two sample sneak peeks to tide you over. Happy January, you guys!
Posted by Jamie Littler at 09:13 2 comments: