My goodness, it's been too long! I've even forgotten how to do half of the coding on blogspot. But I'm back! No, no, applause isn't necessary, but thank you. I've been INSANELY busy, which is great, and has me clicking my heels in joy, but it also means my blog has suffered somewhat from a lack of updates.


What have I been busy doing, I hear you ask? Well, apart from moving house (which I can vouch is one of the most stressful things you can experience in the sheltered, cozy life I lead...), I have completed a new 2-part Cogg and Sprokit adventure, the cover of which you can see above, which begins in this weeks Phoenix Comic. The Phoenix also have a brand new, loverly website which I urge you to check out: it now has a new regular blog of various comic goodies and a shop, where new Phoenix merch is being added all the time (I'm currently planning some Cogg and Sprokit stuff!), and the ability to buy single back issues too! HIGH FIVE!!
Last week I also took part in the first ever, fantastic Oxford Children's Comic Festival, which was an absolutely stupendous day filled with comic workshops by lots of great Phoenix creators, comic stands, drawing tables and everything you could want from a children's comic convention! The event and workshops were completely sold out, so much so that The Phoenix team had to sell morning and afternoon tickets seperately. This really gives hope to th festival becoming a successful annual thing. 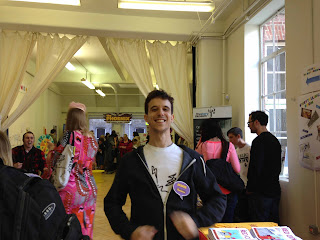 I arrived in typical gung-ho fashion. The place was already packed, and I was only 10 minutes late (I know, I know...but there was TRAFFIC!)! 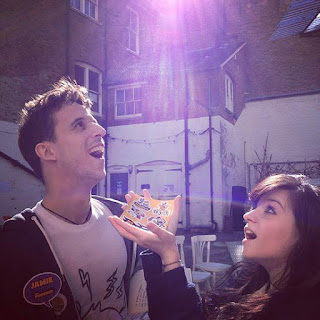 Fellow Phoenix creator Laura Anderson and I discovered that the legends were true: that there really was a holy, sacred set of Phoenix stickers... 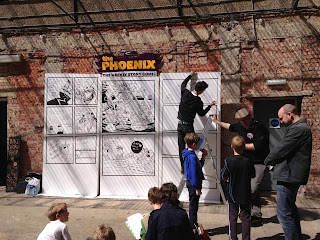 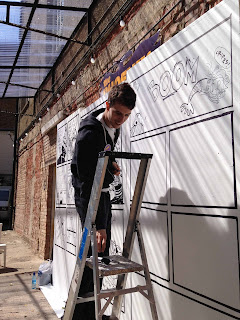 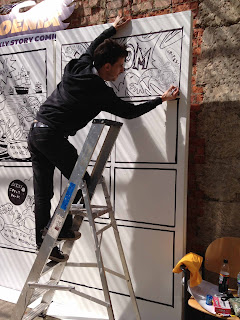 I then took part, alongside Phoenix artists Neill Cameron, Sarah McIntyre, Laura Anderson, Matt Baxter, Zak Simmonds-Hurn, Robert Deas, Adam Murphy and some genuinely talented younger artists, including Zoom Rockman, in the huge comic story that was being created in real-time in the courtyard. I had the pleasure of the highest panel in the comic, but luckily had the ever trusty Neill 'Safe Hands' Cameron holding my ladder steady. 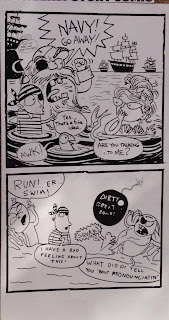 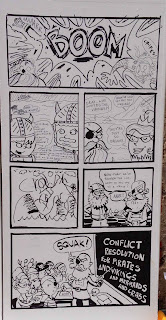 The story was thrilling and epic, with all the twists and turns you expect from high-calibre pirate fiction, as I'm sure the photos of the final result above will show. 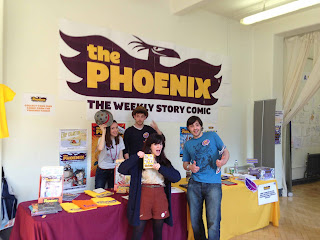 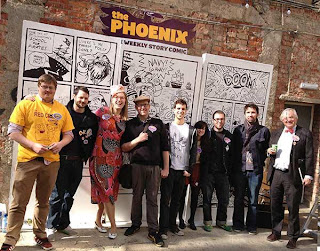 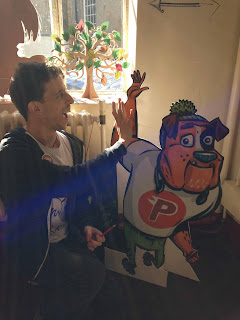 Go team Phoenix! Here's to next year's event(And thanks to Sarah McIntyre for some of these great photos!)! 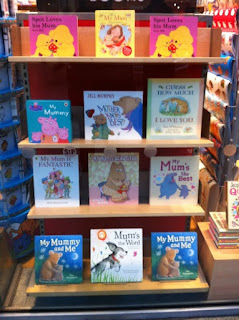 Ooo, and this cheeky photo was sent to me of a Foyle's window display, and none-other than 'Mum's the Word' smiling back as us! It's the weirdest and bestest feeling seeing your work on the shelves like this! So - sorry for the MASSIVE blog post, but I had a lot of catching up to do. More to come soon, in, hopefully, a more concise form...
Posted by Jamie Littler at 09:06 No comments: